Today we had the most excitement we have had in a long while. While visiting another RV Resort we came across a crowd and finally had to ask, whats going on? Well, there was a javelina under a tree. This RV Resort is fully walled in with security gates, so not sure how it got in, maybe followed a car before the gate closed. But it couldn’t get out. So Casa Grande Animal Control was called and showed up to help capture the javelina. With the help of some of the residents they were able to get the javelina to run into a trap. You can hear in the video here the trap close. We then were able to walk the cage and javelina to the street so they Animal Control Officers could loaded it into their truck and set the javelina free in the desert outside the city limits. Though some people think javelina are a type of wild pig, they are actually members of the peccary family, a group of hoofed mammals originating from South America. Javelina are common in much of central and southern Arizona, including the outskirts of the Phoenix area, most of Tucson, and occasionally as far north as Flagstaff. Javelina form herds of two to more than 20 animals and rely on each other to defend territory, protect against predators, regulate temperature and interact socially. They use washes and areas with dense vegetation as travel corridors. Javelina are most active at night, but they may be active during the day when it is cold. See if you can find the lizard jetting across in the video! 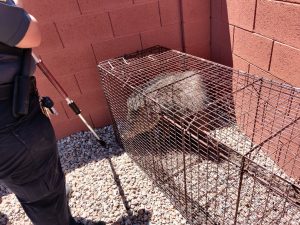 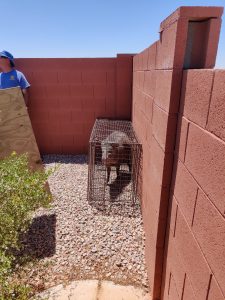