We left Idyllwild this morning on our way to Lake Havasu, me driving the MH and Jo-Ann and the dogs driving the F150. This was too short a trip to hitch up the F150. I also wanted to have someone drive the F150 a bit with the new transmission. We are member of Harvest Hosts so we stayed behind the General Patton Memorial Museum for the night. It turned out to be a great place to stay, there are just dirt lots in the desert and you can stay up to 7 days.

We just made it before the museum closed and spent a couple of hours learning about General Patton and WWII.  The General George S. Patton Memorial Museum was erected in tribute on the site of the entrance of Camp Young, part of the Desert Training Center (DTC) of World War II. He as the first commanding general of the DTC.

Yes, I wore my Navy hat to infuse some diversity to the overwhelming Army theme! 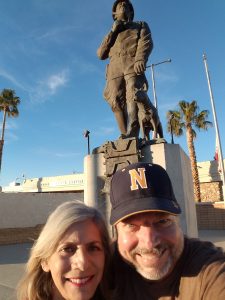 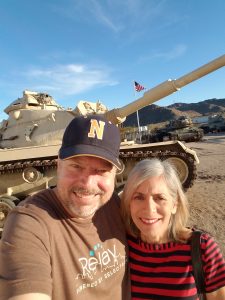