Well we ended up at Fiesta Grande Rv Resort early March 2020 just as the coronavirus started to close down the states. Fiesta Grande is located in Casa Grande AZ which is between Phoenix and Tucson. It has a hospital, Home Depot and Lowes, Walmart, Safeway, Harbor Fright Tools, Tractor Supply so it has just about everything we could need including a large shopping mall which was pretty much closed for the time we were there. 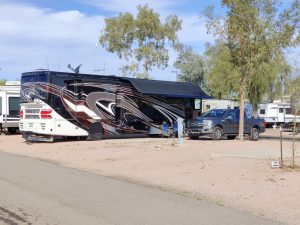 We did meet some friends that we had originally meet at Desert Palm RV Resort earlier in the year, Larry and Jenny who were traveling with her parents Judy and Orlo. They also have a Tiffin Allegro Bus and are from Ohio visiting the western states. We had a great time with them at the park.

For most of the time the activity halls were open so JoAnn, Jenny and Judy played Bingo, did puzzles and card games to keep busy while Larry, Orlo and I shot pool later joined by Mike their son who flew in to visit towards the end of their stay.

We also attended a couple of plays put on by the park and residents, one was Dogsbreath Deveraux, another Complaint Department, Lemonade and the last was The Dastardly Doctor. All were really great and well worth the $5. The park also supplied each table with a cheese, cracker and sausage platter which was a surprise.

We also visited with JoAnn’s brother Dennis and sister-in-law Demetria and when to the Mystery Castle. Mystery Castle is located in the city of Phoenix, Arizona, in the foothills of South Mountain Park. It was built in the 1930s by Boyce Luther Gulley for his daughter Mary Lou Gulley. You can read more about it here Mystery Castle.