Well we headed back to Southern California on our start back up the coast to hopefully all the way to Canada, if its open!

We only stayed a short time as we had been here before and with most attractions closed it was more just to get going from our long stay in Arizona. We were able to get 50 amps, sewer with great satellite and cell service at this campground. While here we did get to me our neighbor, Captain Bob Norling. He hails from New York but recently from South Carolina. He’s traveling in a class A towing a small car. But what makes him such a fascinating person to know is the stories he has of his life and what a life he has lead. If you ever see him make sure you stop and talk with him, you wont regret it. 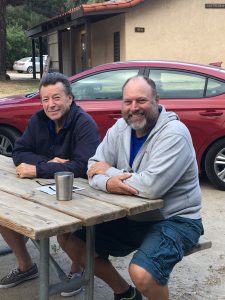 We also had time to run to JoAnn sisters house in Thousand Oaks for an evening with Tish, Mike and JoAnn’s other sister, Jennifer. We always have a good time with them all. We also stopped at the church that we were married in 41 years ago! 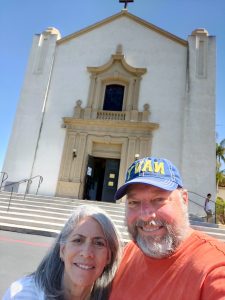 One issue I did have while there were the damn squirrels! Very bad for cars, trucks and motorhomes. They get into the wiring and love to chew things up. I saw one sitting on the front passenger tire on our truck and when I went outside it ran into the engine bay. I opened the hood and saw that he had been there before as he pissed all over the engine cover! So I drove it around on the roads at very high speeds and heated up the engine hoping he would leave and not come back. Well the next day he was back, looked like it he had a burrow just under the truck parking area. So I thought I would give him some mouse  pellets that I set on the engine cover. He took the bait but as I found out later, they love the stuff, its good on mice but not squirrels! So I had to drive into town to get some squirrel stuff but all they had was a spray that would keep them away. Boy did it smell bad and I sprayed it all over the the trucks engine, tires and frame. I also did the motorhome to be sure. Well that seemed to do the trick as I never saw any squirrels around us again. 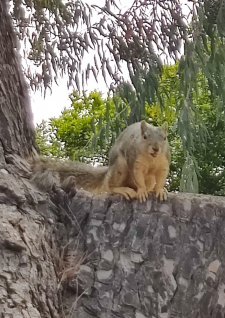 On our way out we had to stop at a Cummins service center to get the motorhome DEF head replaced. I had talked with Tiffin earlier about the codes the motorhome was throwing so they sent a new DEF head to the Cummins service center in Ventura which was mostly on our way north. It took about 4 hours to replace and we were once again on our way. Thanks to both Tiffin and Cummins for working with us to get fixed.