We spent 3 weeks at this RV campground and had a really good time. We were able to get a large space in the X section which had 40 amps and sewer. This area also had good satellite and cell service. There are deer everywhere here and they love to sit under your RV. They are pretty use to people and even dogs. They didn’t even flinch at Bily’s barking. We meet several new friends Ron and Jude, Ray and Ermadella all from Canada!! Eh? Oh yea, Canada!  There was also Steve and Lou from Texas.

We ended up taking Bily to see the local veterinarian as he has been sneezing more lately. I thought it was allergies as he started as we moved north. The vet talked to us about foxtails and that its common for dogs to sniff one into their nasal cavity and as you know foxtails only go in one direction. So poor Bily had to be put under so she could check out his nasal and sinus passages. Luckily she found no foxtails so we all agreed its just allergies. So he’s now on Claritain until we get back to someplace without what ever he’s allergic to. 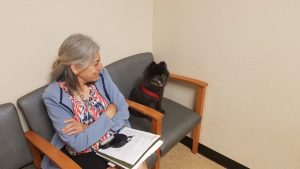 We stopped at a local casino to give them our money, but to our surprise, Jo-Ann ended up $20 ahead! So we stopped and ran! 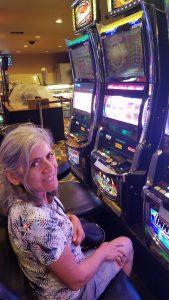 The weather started to turn hot so we ended up getting an inflatable kayak to try and stay cool. The lake is a great place to cool off, we also got to see a bald eagle pair that had a nest at the far end of the lake.